Hinterland is originally a German word meaning “beyond land” and was first used to describe the land on the edge of a port. It has subsequently evolved and is often now used metaphorically, referring to that which is outside the usual, the everyday, the safe, the known.
The long Kintyre peninsula is mostly hinterland. There is a coastal road that runs up and down both the east and west coasts, largely following a raised beach. Beside the road is a narrow strip of flat fertile land and then the ground rises, eventually reaching between up to 400 metres. But during the ascent there are many hidden valleys. Hidden from the road that is.
Today I explored one of these a few miles north of where I live. I came across two ruinous farms (less than a mile apart) surrounded by winding grassy field dykes, and came across what I think was an old corn-drying kiln. Bracken, rough grass, heather and bog myrtle now tussle and tousle with each other where once was short-cropped turf.
I did not meet another soul and experienced times of complete silence, broken only when I approached the valley burn. I guess you can tell true silence when you start listening out expectantly for the sound of flowing water.  I followed a quad bike track which led me to a ford, which I was able to cross on foot. Natural fords have been crossing places for thousands of years. It was good to see them still being used.
Both farms are located beside a narrow band of limestone, which meant the ground was sweeter and better draining. People used to know these things without needing to go to university to study geology.
I found what I thought initially was a high field dyke. I looked over and realised it was spoil mounded up beside a long winding vein of limestone, used for building and as a soil conditioner.
Nearby was a modern quarry with a whole section of hillside blasted out, and beside it lime kilns constructed of cement looking like war bunkers. Surreally, shattered clay pigeons lay all around, flecking the ground with fluorescent orange.
What is now hinterland was once well-settled. For those living there it was the centre, not the beyond land. Sycamore, ash and elm still grow beside the ruins and nearby is one of the biggest native woods in Kintyre, with some ancient hazels at their heart. 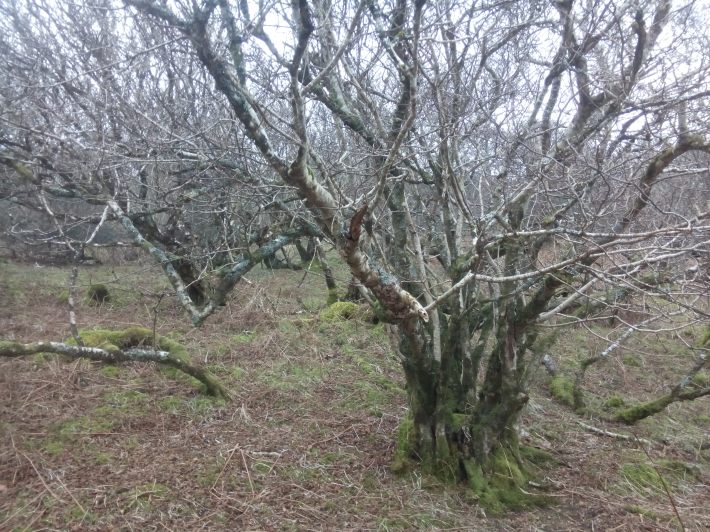 I live in Kintyre, the long peninsula acting as a natural breakwater for the Firth of Clyde, west of Glasgow. A Permaculture and Transition practitioner, I am working with fellow community activists to co-create a resilient and vibrant local bioregion.
View all posts by edwardtyler →